LGBTQ and Islam: Our Approach - by Imam Zaid Shak

Imam Zaid Shakir discusses Islam’s stance on the LGBTQ issue and limits as Muslims, and in regards to the LGBTQ community. How, Muslim youth should interact with the LGBTQ community, including when their own Muslim friends identify as LGBTQ. He also explains how youth can be ambassadors of Islam while still respecting other communities. Published: ISNA Convention 2018 at MYNA (Muslim Youth North America), Houston, TX. on 9-8-18. Part 2 : Q and A at https://youtu.be/BPadCZtu0Y0

Before going to any debat must understand what you understand about the subject.

(They are very part of social life of  mandkind from thousand of years. they respected as diffrents )

and in Muslims History they were among main society

they are not to day LGBTO

They are natural born male and female organs and after their phycology life styal became   same-sex marriage,Homosexsul  and somany diffrents .

Today LGBTO is political anti faith atheist used as Human rights  their agenda : Really they do not help them but used them  for political platform
for divert main Human Rights violations on all over world by wastern colonials post imperial dominations          https://en.wikipedia.org/wiki/LGBT

A bisexual woman who is a practising Muslim says controversial lessons in schools about LGBT rights are necessary, because of the abuse and prejudice she experienced. Hafsa Quereshi was bullied throughout her teenage years for being different. She's been sharing her story after seeing protests by parents in Birmingham who disagree with the teaching of LGBT rights in primary schools. The campaigners want the inclusive 'No Outsiders' programme to be abolished. Some parents say it's not age appropriate, and they want their religious views to be taken into account. But Hafsa says the lessons are necessary. • Subscribe to ITV News on YouTube: http://bit.ly/2lOHmNj • Get breaking news and more stories at http://www.itv.com/news Follow ITV News on Facebook: https://www.facebook.com/itvnews/ Follow ITV News on Twitter: https://twitter.com/itvnews Follow ITV News on Instagram: https://www.instagram.com/itvnews/

Historian Blair Imani examines the intersection of her Black, Queer and Muslim identities. Blair Imani is writer, mental health advocate, and historian living at the intersections of Black, Queer, and Muslim identity. In addition to being a public speaker, Blair is the author of Modern HERstory: Stories of Women and Nonbinary People Rewriting History (2018) and Lifting As We Climb: The Great Migration & the Black American Dream which hits shelves in January 2020. She is also the official ambassador of Muslims for Progressive Values, one of the oldest progressive Muslim organizations to support the LGBTQ+ community. This talk was given at a TEDx event using the TED conference format but independently organized by a local community. Learn more at https://www.ted.com/tedx

For more on this event, visit: http://bit.ly/cfcXRf For a full-length video of this event, visit: http://bit.ly/Z3Gctb For more on the Berkley Center, visit: http://berkleycenter.georgetown.edu April 9, 2007 | In April 2007 the Berkley Center hosted Tariq Ramadan over satellite feed from Europe to speak and answer questions on Islam and democracy, Muslim minorities in Western Europe, and Catholic-Muslim relations. Since July 2004 Ramadan has been unable to enter the United States. Shortly before he was to assume a professorship at Notre Dame University, his visa was revoked under the "ideological exclusion" provision of the Patriot Act. The visa denial is the subject of an ongoing legal challenge brought by the American Civil Liberties Union on behalf of the American Academy of Religion, the American Association of University Professors, and PEN American Center. Tariq Ramadan is Professor of Contemporary Islamic Studies at Oxford University. A Swiss citizen of Egyptian descent, he holds degrees in Philosophy and French Literature and a PhD in Arabic and Islamic Studies from the University of Geneva. He has also studied at al-Azhar. He advocates a self-confident Islam that both engages and critiques Western ideas and institutions. His works include Western Muslims and the Future of Islam (2003) and Radical Reform (2009). He is President of the European Muslim Network.

What does intersex mean?

Intersex is a general term used for a variety of situations in which a person is born with reproductive or sexual anatomy that doesn’t fit the boxes of “female” or “male.” Sometimes doctors do surgeries on intersex babies and children to make their bodies fit binary ideas of “male” or “female”. Doctors always assign intersex babies a legal sex (male or female, in most states), but, just like with non-intersex people, that doesn’t mean that’s the gender identity they’ll grow up to have. This brings up questions about whether or not it’s OK to do medical procedures on children’s bodies when it’s not needed for their health.

Being intersex is a naturally occurring variation in humans, and it isn’t a medical problem — therefore, medical interventions (like surgeries or hormone therapy) on children usually aren’t medically necessary. Being intersex is also more common than most people realize. It’s hard to know exactly how many people are intersex, but estimates suggest that about 1-2 in 100 people born in the U.S. are intersex.

There are many different ways someone can be intersex. Some intersex people have genitals or internal sex organs that fall outside the male/female categories — such as a person with both ovarian and testicular tissues. Other intersex people have combinations of chromosomes that are different than XY ( usually associated with male) and XX (usually associated with female), like XXY. And some people are born with external genitals that fall into the typical male/female categories, but their internal organs or hormones don’t.

What happens when someone is born intersex?

Most of the time when a baby is born intersex, doctors and the family decide on a sex, either male or female, and raise the baby as the gender expected of that sex. It’s pretty common for surgery to be done on the baby’s genitals and also for the child to be given hormones to make them fit into male/female categories as they go through puberty.

But activism by and for intersex people is growing, leading to some changes in our culture, which right now treats intersex as a medical problem instead of a natural, healthy way bodies can be. Today, more and more people believe unnecessary surgery and other medical interventions shouldn’t be done on intersex babies and children at all. Instead, intersex people should be able to decide for themselves when they’re older if they want treatment or surgery.

Criticism of the term 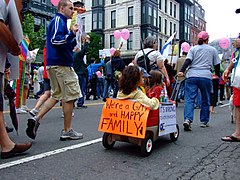 LGBT families, like these in a 2007 Boston pride parade, are labeled as non-heterosexual by researchers for a variety of reasons.[84]

The initialisms LGBT or GLBT are not agreed to by everyone that they encompass.[13] For example, some argue that transgender and transsexual causes are not the same as that of lesbian, gay, and bisexual (LGB) people.[85] This argument centers on the idea that being transgender or transsexual have to do more with gender identity, or a person's understanding of being or not being a man or a woman irrespective of their sexual orientation.[28] LGB issues can be seen as a matter of sexual orientation or attraction.[28] These distinctions have been made in the context of political action in which LGB goals, such as same-sex marriage legislation and human rights work (which may not include transgender and intersex people), may be perceived to differ from transgender and transsexual goals.[28]

A belief in "lesbian & gay separatism" (not to be confused with the related "lesbian separatism"), holds that lesbians and gay men form (or should form) a community distinct and separate from other groups normally included in the LGBTQ sphere.[86] While not always appearing of sufficient number or organization to be called a movement, separatists are a significant, vocal, and active element within many parts of the LGBT community.[87][86][88] In some cases separatists will deny the existence or right to equality of bisexual orientations and of transsexuality,[87] sometimes leading public biphobia and transphobia.[87][86] In contrasts to separatists, Peter Tatchell of the LGBT human rights group OutRage! argues that to separate the transgender movement from the LGB would be "political madness", stating that:[89]

Queers are, like transgender people, gender deviant. We don't conform to traditional heterosexist assumptions of male and female behaviour, in that we have sexual and emotional relationships with the same sex. We should celebrate our discordance with mainstream straight norms.[...]

The portrayal of an all-encompassing "LGBT community" or "LGB community" is also disliked by some lesbian, gay, bisexual, and transgender people.[90][91] Some do not subscribe to or approve of the political and social solidarity, and visibility and human rights campaigning that normally goes with it including gay pride marches and events.[90][91] Some of them believe that grouping together people with non-heterosexual orientations perpetuates the myth that being gay/lesbian/bi/asexual/pansexual/etc. makes a person deficiently different from other people.[90] These people are often less visible compared to more mainstream gay or LGBT activists.[90][91] Since this faction is difficult to distinguish from the heterosexual majority, it is common for people to assume all LGBT people support LGBT liberation and the visibility of LGBT people in society, including the right to live one's life in a different way from the majority.[90][91][92] In the 1996 book Anti-Gay, a collection of essays edited by Mark Simpson, the concept of a 'one-size-fits-all' identity based on LGBT stereotypes is criticized for suppressing the individuality of LGBT people.[93]

Writing in the BBC News Magazine in 2014, Julie Bindel questions whether the various gender groupings now, "bracketed together" ... "share the same issues, values and goals?" Bindel refers to a number of possible new initialisms for differing combinations and concludes that it may be time for the alliances to be reformed or finally go "our separate ways".[94] In 2015, the slogan "Drop the T" was coined to encourage LGBT organizations to stop support of transgender people; the campaign has been widely condemned by many LGBT groups as transphobic.[95][96][97][98]

Many people have looked for a generic term to replace the numerous existing initialisms.[87] Words such as queer (an umbrella term for sexual and gender minorities that are not heterosexual, or gender-binary) and rainbow have been tried, but most have not been widely adopted.[87][99] Queer has many negative connotations to older people who remember the word as a taunt and insult and such (negative) usage of the term continues.[87][99] Many younger people also understand queer to be more politically charged than LGBT.[99][100]